I love Clarity 7 – as someone how has worked with the product since its inception I truly feel this is the version where Clarity matured.  The back-end re-architecture has truly provided amazing performance enhancements.  There are sadly some side-effects to these changes – one of them is the inability to sort Page Option Lists out-of-the-box.

In Clarity 6 we were able to use ORDER (for SSAS clients) or <SORTALTNAMES (for Essbase clients) in the page specification to sort the lists – no more in Clarity 7, where Studio intelligently builds Clarity abstract statements in the .template file based on your selections.

Thankfully Clarity has stuck true to their roots as a consulting company and provided multiple methods to go under-the-hood and by-pass Studio for the definition of specifications.

The solution for SSAS vs. Essbase clients is a little different – but in both cases we will using MDX and the ORDER statement.

For SSAS clients the solution is very straight-forward using the Snippet object in the OLAP member list. 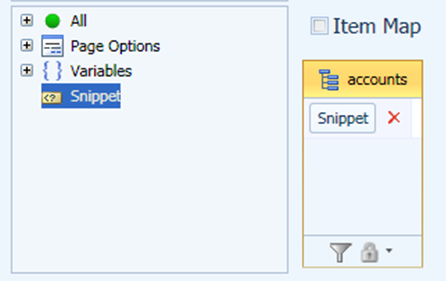 For the string sort expression you most likely will either be using the member name or alias:

Unfortunately for Essbase clients the solution is more complicated.  For performance reasons Clarity executes Essbase implementation page options not as MDX but using Calculation Script.  Essbase Calculation Script is great for calculations, but it does not have any functionality for sorting – so the order in which members are returned is hierarchy order.  In Clarity 6 this wasn’t a problem as Clarity used Report Script for member list queries.

Thankfully Essbase starting supporting MDX queries in version 7 – the trick now is to get Clarity to use MDX instead of Calculation Script for the page options.  To do this we need abandon Clarity Abstract completely and build our own MDX statement.

Whether you have just created a new OLAP Member List or are enhancing an existing one, the first step to using MDX to define the drop-down list members is to remove the <Abstract> node from the XML.

Find the OlapMemberQuery node matching the list to be enhanced and remove all contents between <Abstract> and </Abstract> including the node headers themselves.  When you are done you should only have the <OlapMemberQuery> and the <Source> nodes remaining.

At this point you will notice that the Design window will remove the dimension information and grey out the New and Delete options.  This is a good sign as those options are only available when the list uses the Abstract node for the list specification.

After the <Source> node add the <Script Type = “Mdx”> node header into the XML.  Note that Mdx in the Script Type is case sensitive and must be capital M, small d small x.

Your XML should now look as follows:

After the <Script> node header add a <Text> node into the XML.

Your XML should now look as follows:

We finally now get to the good part – adding the MDX to the report.

Within the Text node add your MDX statement.  Although not always necessary, it is good practice to encapsulate your MDX within a <![CDATA[ Insert MDX here ]]> construct, just in case you use any restricted characters or words.  Please note the MDX rules below; otherwise your MDX might not work as expected or at all.

It is highly recommend that you build and test your MDX within your OLAP tool first as you will receive better feedback / errors and quicker iterations than using Clarity for debugging.

Your final XML should now be something like the following:

This MDX script displays the bottom level descendants of the Year dimension alphabetically based on Alias names.  You would use [Year].CurrentMember.[MEMBER_NAME] in the ORDER statement to sort by member name.

Keep up to date with OLAP insights, tools and resources
PREVIOUS POST

Read Now
Ready to start talking to the expert consultants?
Talk to an expert on 0131 790 5140 or info@consult.co.uk
SECTORS MENU IN DETAIL